The BPR filters listed below have been specifically added to help produce an NPR render. They can of course be tweaked and combined with other filters to produce differ­ent effects which may not be in an NPR style.
You can combine up to 12 filters together with each filter affecting the BPR in real time. You can press and hold the Shift key while changing any slider parameters to see the adjustment almost instantly. Please keep in mind that using the Shift key with a lot of filters active may be slow on large renders.

Some BPR filters have specific settings beyond the usual main setting slider and its associated opacity slider. These settings can be found in the Modifiers popup which will be grayed out if the filter has no extra options. Different filters can have different numbers of available modifiers. The Modifier popup is located below the Back and Front Color selector which is also used by some filters to alter their color values. 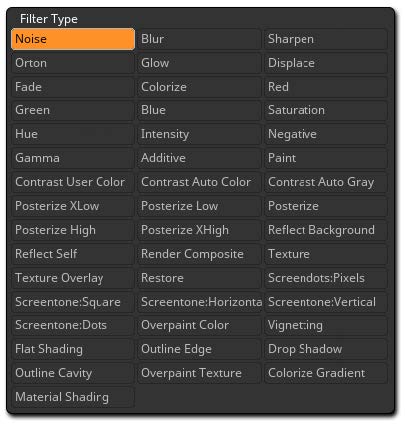 The full list of BPR filters. Near the bottom of the list you’ll find most of the filters dedicated to NPR rendering, although they can also be used for regular renders.

Using a negative or positive value for the Displace slider will produce a similar effect, but via a different algorithm. When searching for a specific style, don’t forget to try both positive and negative values.
This filter is great for altering the outline edges of the model, creating a style that is more like a pencil than computer graphics.

On the left, the original render. On the right, the Displace filter has been applied. Notice the lines and shading deformations.

The Render Composite filter is a renamed version of the Texture Overlay filter from earlier ZBrush versions. This filter has a texture modulator and when activated it will load (and store) the current rendering with its filters. An example of where this is useful is to blend the result of your current filter with another to create a composite render.

This filter can also be used to generate multiple renders of a model in different views. You can save a first view then hide the render composite, changing the point of view before doing a new render. At this point, reenabling the previous render composite will blend both views together.

The Render Composite filter in action. Notice the render stored in the Texture modulator, which can now be mixed with other filters.

The Texture Overlay filter will apply a selected image (from the Texture slot under the Modifiers) on top of the current render.

This image can be scaled up and down through the Texture Overlay slider and modi­fications can be applied in the Modifiers popup. For example, the Rotation of the texture and the Orientations Count slider will change the orientation of the overlaid texture based on the color intensity/shade of gray.
This power of this filter comes from the operators which will clip the texture in mul­tiple ways, like applying the texture on only the shadow areas in your render or only to a specific range of shades on the model.
The texture can be modified by using the Back and Front color swatches as well. These colors will replace the texture or alpha color, based on the intensity of the alpha or texture.

On the left, the original render. On the right, the Texture filter has been applied with an alpha as a texture.

The Texture Overlay filter will apply a selected image (from the Texture slot under the Modifiers) on top of the current render.

This filter is very similar to the Texture filter except that it analyzes the texture inten­sity and then creates a bump effect based on the median intensity value. This filter will therefore work best with greyscale images. It’s a great filter to simulate pencil effects in your renders.
This filter uses the same settings as the Texture filter. Please refer to the section above for more information.

The Screendots: Pixels filter applies a dot-type noise on your render, with the dots each being one pixel in size.
The positive and negative values of the filter will define whether the dominant color is defined by the Back Color or Front Color value. This filter is great for adding noise variations to a render. 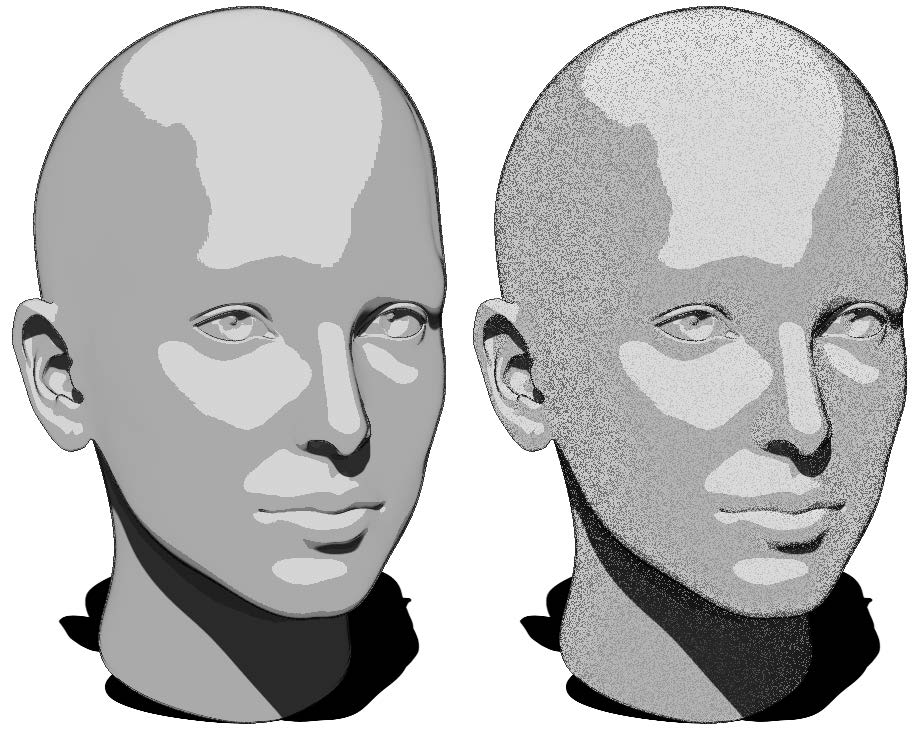 Pixels has been added to the model on the right. It has been modulated with the Fresnel setting, making the effect more apparent on the borders of the model and less on its font part.

The Screentone: Square and Dots filters use the render’s luminance value to create a square or dot pattern. The darker the original image, the larger the squares or dots will be.
The Modifiers alter this default behavior by allowing you to use a constant size, change one of the colors or alter the effect’s transparency.

On the left, the original model followed by Screentone: Square and then Screentone: Dots applied, each one with different settings.

The two filters with different settings.

OverPaint Color is a filter which will create a square base pattern from your image using the color intensity of each square. You can then apply multiple parameters to change the size and orientation of the squares and add variations to make it look natural.

This filter can be used to make nice background patterns such as old paper.

The OverPaint Texture filter is the same as the Overpaint Color filter except that it will overlay a texture on the square shapes. Both filters share the same parameters.

The Vignetting filter darkens the boundaries of the document. This effect is a very popular way to place the visual focus on the model. By tweaking the modifiers of the filter you will be able to change the center position, affect the softness of the effect and alter its color.

On the right, the Vignetting filter in action.

The Flat Shading filter produces a cell shading effect in your render. It can simulate the stepped curve effect that you can manually create in Materials as explained in the “Realtime NPR with Cell Shading and Outline Look” section above. This filter analyzes your render colors and will crops them to produce a number of shades defined by the same named slider in the Modifiers popup.

Editing the Exponent value shifts the spread of shades toward the darker or lighter colors of the model.

The Minimum and Maximum Intensity sliders will trim the minimum and maximum range for the model colors.

The Colorize modifier will add a color tint to your flat shading, using the colors lo­cated in the Back and Front color pickers. 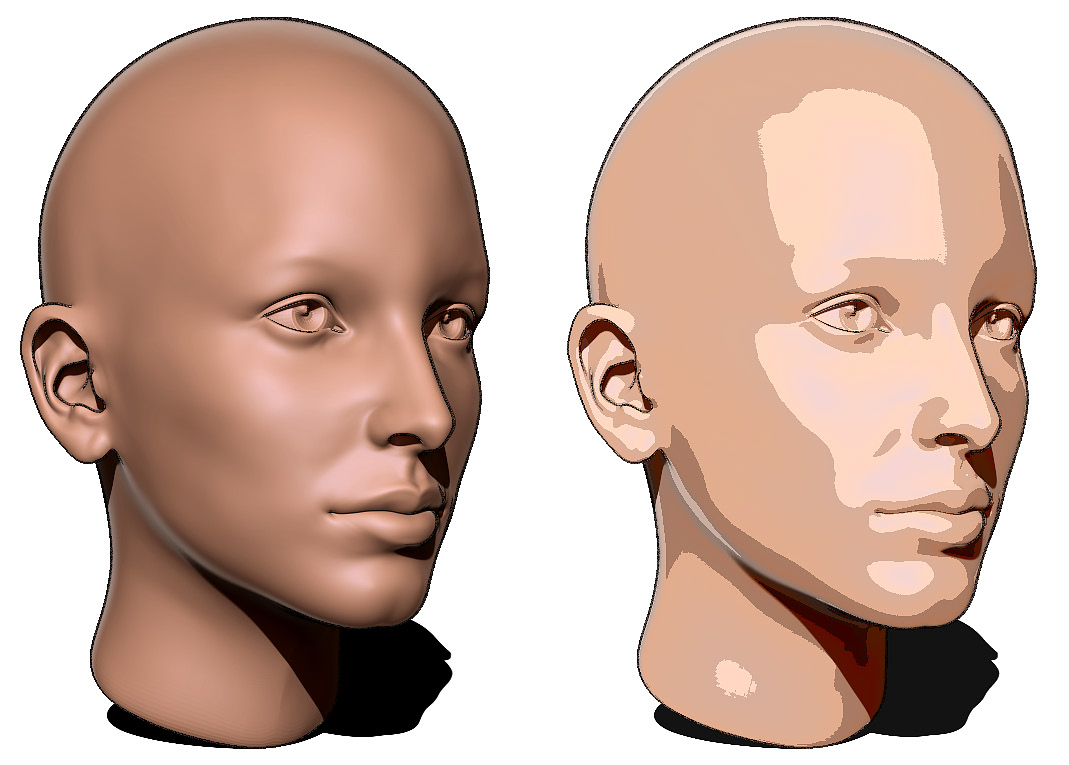 Two different models, organic and hard surface. Each is shown both without and with the Flat Shading filter.

The outline edge filter creates a line around the model’s silhouette and also any shapes that are prominent from the camera angle. For example if we are rendering a human face, a line will be added around the entire boundary and also (depending on the camera angle) some parts of the nose.

You can add noise to the outline, making it less “computer generated,” and change the Outline Falloff to modify the outline detection and affect its thickness.

The main slider will affect the color and intensity of the outline, based on the Back and Front color swatches.

The same model with the Flat Shading filter except that on the right, the Outline Edge filter has also been added which makes a strong visual difference in shape perception.

The Outline Cavity filter is designed to create an outline to the model similar to the Outline Edge filter explained above, except that it uses a different detection algorithm and so provides different Modifiers.

This filter is better than Outline Edge for detecting curvature of the surface on the model.

The main slider affects the color and intensity of the outline, based on the Back and Front color swatches.

The Drop Shadow filter creates a black copy of the current model which can be used as a black shadow. However, the copied image is by default on top of the render rather than behind. To create a true Drop Shadow, you need to use modulators such as Mask at a value of -1 to apply this filter to everything except the model.

The Modifiers let you change the drop shadow position as well as flip it or changing its saturation and intensity.

The Drop Shadow filter has been added on the model from the right. By default, the filter doesn’t provide a blur setting, but a Sharpen filter with a negative value was applied to everything but the model.

The Material Shading filter stores a material (which can include MatCaps) within the filter which can be used to provide base color and shading to your filters. This means that if you save your BPR filters through a RenderSet preset, you can be sure that your render will look the same on other models which don’t even have the same materials as a base.

You need to click on the Texture selector below the Modifiers section to select the material to use with your filter.