Because MatCap can easily recreate a lighting environment on a model’s surface, it’s ideal for realistically incorporating 3D models into photographs of actual scenes. Let’s take a look at this in action.

The photograph is of chilies in a vegetable bin. We can see subtle color gradations, specularity, and (as will become apparent) other environmental lighting effects. 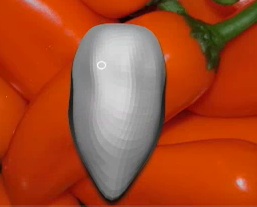 We’ll start with a simple chili model, and set it up with a MatCap material initialized to an orange color sampled from the scene. 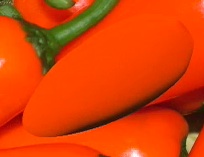 Let’s sample the reddish tinge at the top right rim of one of the photographed chilies. As the mouse is dragged to position the MatCap vector, the light ball updates to indicate the effect that vector will have on the created lighting environment. The new MatCap lighting is applied to the model when the mouse is released. 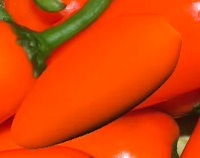 Once the mouse is released, the shading is applied to the model

Creating the specular lighting is similar, except that Ctrl-dragging out from the vector determines the sharpness of the specular effect.

Ctrl-click on a defined vector…

…drag to sharpen the highlight…

…for a very shiny surface.

After defining a few more MatCap samples (total of perhaps six were used for this example), and standard sculpting and other operations in ZBrush to place the chili (but not a single stroke of painting!), we’re left with the final result: 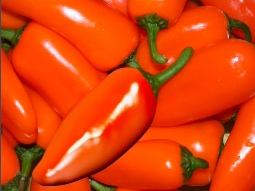