Before you start, please note that if custom interface items have disappeared when you re-open ZBrush, it means that those items are “contextual” functions. ZBrush only displays certain functions if you have a model or project in a state at which those functions can actually be used. When you reopen ZBrush, if there is no project in the specific state that the function or feature can be be used, it can’t be displayed.


Now that we’ve looked at how to change the appearance of your interface, it’s time to examine changing the layout. This is how you move interface elements from one place to another, and even create new menus.

The interface as a whole is divided into several overall sections. Some of these sections are specifically for the purpose of holding interface elements, as shown below: 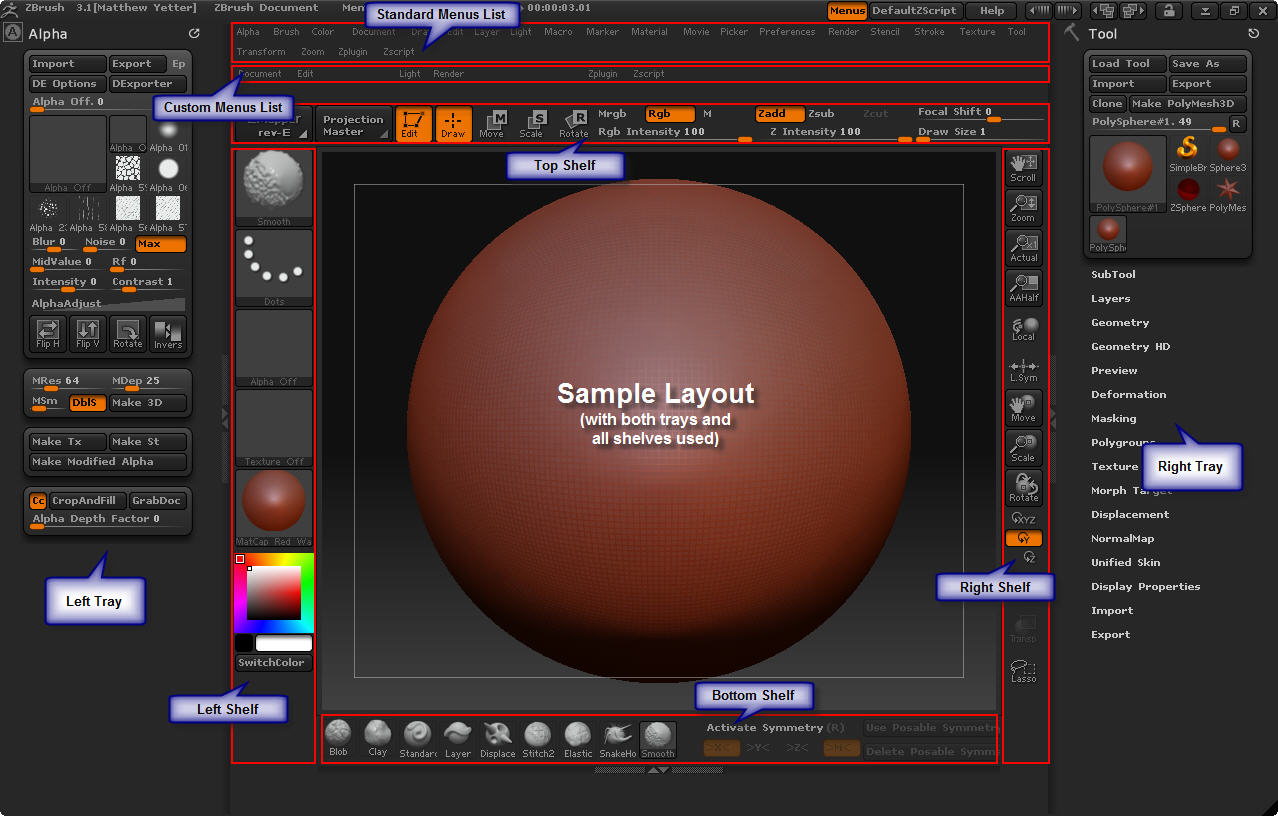 The various places where interface elements may be placed

The trays are on the extreme left and right sides of the interface.

How to Move Elements Around

The Config sub-palette, with Enable Customize turned on, and the Custom UI sub-palette

By default, all interface elements except menus are locked in place. This makes it impossible to accidentally move anything around or delete it from the tray. To enable layout customization, you must turn on Preference>Config:Enable Customize as shown in Figure 3.

Once that has been turned on, you hold down the Ctrl + Alt keys to tell ZBrush that you want to move items around. With Ctrl + Alt held down, you simply click and drag an item to move it to its new home. There are several rules that apply here:

These rules will quickly become second nature as you work with them. It’s a very straight-forward and logical system.

An amazingly powerful feature of ZBrush is the ability to create your own menus, and even place submenus within them. With this feature, you could conceivably rebuild the entire ZBrush interface!

The first step to using this feature is to turn on Preferences:Config:Enable Customize. Doing so activates the options in the Custom UI menu.

To create your own menu, click Create New Menu. A popup box immediately appears, asking you to name the new menu. Click in the text entry field, type the desired name, then click the OK button. This is shown in Figure 4.
Once a menu has been created, it appears at the far right of the master menu list. This is only temporary. Placing the menu into a tray and then removing it from the tray will cause it to be ordered alphabetically relative to the other menus. The exception to this is if the menu shares the same name as one of the default menus, in which case it will be treated as if it’s named “User”. For example, creating a custom menu named “Material” would result in two such menus being shown in the master list. The original Material menu will be ordered alphabetically, while the new one will be placed between the Transform and Zoom menus. As a general rule, it really isn’t a good idea to give a new menu the same name as an existing one.
(Don’t go creating menus willy-nilly, without need. Once created, the only way to remove a menu is to restart ZBrush without saving the configuration.)
After a menu has been created, it must be moved to a tray before you can place items within it. Click on the name of the user menu to expose its handle, then use that handle to drag the menu to either shelf. Once placed in a tray, you can also rename it at any time by Ctrl+Alt+clicking on its title.
Placing items within user menus is as simple as Ctrl+Alt+dragging them from another menu. When the item approaches the user menu, a bounding box will appear. Drop the item any place within the box to place it there.
Menus are filled according to normal reading order. In other words, from left to right, then from top to bottom. The first item placed in a menu will automatically go into the upper left corner. The next item will go to its immediate right, and so forth. The exception to this rule is if you place one item on top of an existing item. The new item will take the first one’s place, and the first will be pushed to the right or down depending upon available space. Figure 5 shows this at work.

Filling a menu with interface elements

One thing that will help is to understand that the size of all interface elements is calculated in fractions of one. Elements can be full size, meaning that they take the full width of the menu. Alternatively, they also come in 3/4, 1/2 and 1/4 widths with occasional exceptions that are 1/3 width or some other value. The default interface element (such as a button) is 1/8 in height. All combinations are possible, all the way up to a maximum size of 1×1 (such as the preview found in the Draw menu).
Sometimes for aesthetic or organizational regions you may find it desirable to place a separator into your custom menu. The Preferences:Custom UI menu provides several of these in various sizes, which become available whenever Enable Customize is active. To place one of these separators, simply drag it out of the Custom UI menu like any other interface element. 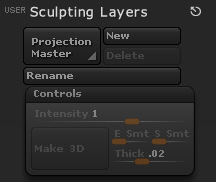 Another item that can be placed in your menu is a submenu. Drag the item called Preferences:Custom UI:Custom SubPalette and place it into the menu that you’re building. Additional items may then be dragged into this submenu. Initially, the submenu will be named “Untitled”. After you have placed an item into it, you can rename the submenu by Ctrl+Alt+clicking on its name. Figure 6 shows a submenu placed within a custom menu.
With these tools together, you can build complete menus with all the functionality of the default ZBrush interface. Custom menus may even be built using buttons that are created via plugins.
The only remaining thought is what to do with these custom menus once you’ve created them. The first option is to leave them in the master menus list. They’ll always be available to you here. Alternatively, you can drag select menus into the custom menu list. This is a convenient way to hide all but the menus that you want to be available in your interface. They can be placed anywhere within the available space, and in any order. Once you have arranged the list to your satisfaction, turn off the Menus button in the title bar to hide everything except those menus that you’ve specifically placed in the custom menu bar. Figure 7 shows how this can be done.

A custom interface that hides the master menus list, and only shows some custom menus

Once satisfied with your interface, press Ctrl+Shift+I to set it as your custom user interface, which will be loaded every time you launch ZBrush. If you simply want it to be available as an alternate layout, use Alt+Ctrl+Shift+I instead. You will then be able to load it manually using Preferences:Config:Load UI or through the Ctrl+L shortcut.