ZRemesher will recreate a new polygonal structure for your model, with a controlled flow of polygons and a global polycount value. In just a few seconds you can convert a 200,000 polygon DynaMesh to a 10,000 poly retopologized model with a natural flow of polygons. From there you can project all the fine details from your original sculpture, easily generate UV’s with UV Master, and ultimately create your Vector, Dis­placement, Normal and Diffuse maps.

ZRemesher 4.0 brings speed and other improvements giving you greater control over the new topology.

On the left, the original mesh; on the right, after ZRemeshing with Keep Polypaint enabled.

Keep Polypaint means that you can create models with greater freedom knowing that the look you have achieved will be preserved.

The new fast Retry means that the ZRemesher operation can be repeated quickly after changing some settings. Results create a single undo so can be compared easily using the Undo History slider.

ZRemesher will not use the stored mesh data (a full recompute is needed) after modifying:

The stored mesh data will still be used after modifying: 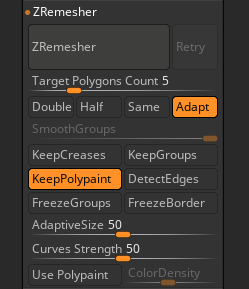 When KeepPolypaint is turned on any polypaint on the model will be preserved as far as possible for the new polygon density.

Important Note: Legacy mode has been removed as it is no longer compatible with technical requirements.