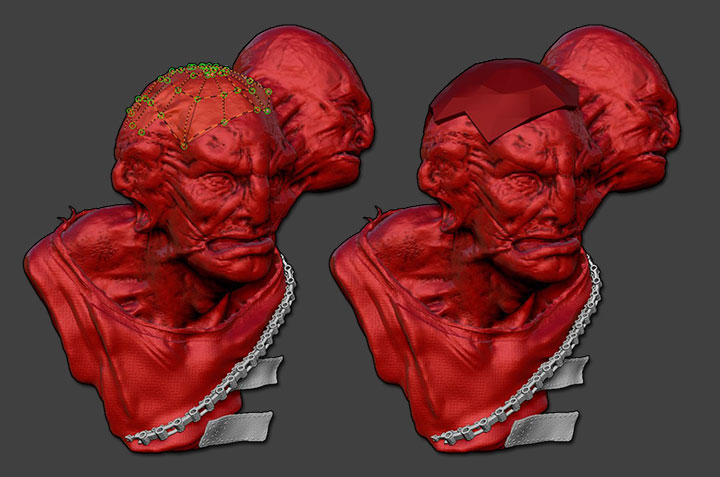 On the left, the drawn curves with the polygons in preview mode. On the right, the new polygons with a predefined thickness, ready to be sculpted. Model courtesy of Mariano Steiner.

It is important that the model doesn’t have subdivision levels.

This new brush basically draws curves on the model and snaps them to the surface. Unlike with the other Curve brushes, curves created with the Topology brush can’t be edited on the surface of the model. They can only be deleted, extended by starting at the end of an existing point, of closed by connecting both extremities with a new curve. They can also be deleted by holding Alt while drawing a new curve to intersect the one you wish to remove.

While adding curves, if ZBrush detects an intersection it will display a green circle to indicate this.

When any curve crosses over another, ZBrush will detect this intersection as a vertex. When there are three or four green dots connected ZBrush will display a triangle (red) or a quadrangle (orange) indicator. Once the triangle or quad has been completed you can simply click on the mesh to create the new topology. 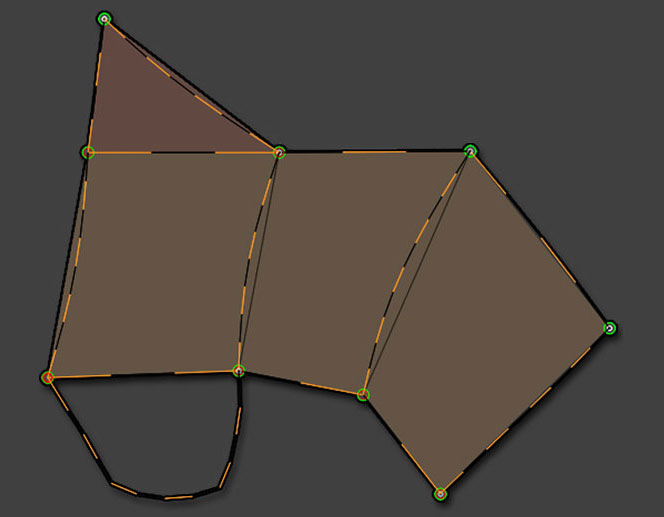 A green circle indicates the connection between two curves. Notice that ZBrush detects triangles (at the top) and quadrangles. In the bottom example a polygon is missing because the intersecting curves have only two connections and need one or two additional connecting curves.

Some actions will help you with the retopology process:

While working, the polygons you see will be a preview. To finalize your new topology as an actual 3D mesh, simply do a single click on the support mesh. This click must be on the support model itself; clicking on empty canvas will have no effect.

Thickness of the new model is set by changing the Brush Draw Size value before clicking on the support mesh. This is identical to the Tube style or Curve Fill brushes. If you set the Draw Size to 1, the created polygons won’t have a thickness, which will be perfect for when retopologizing a model.

Note: After generating the new mesh, it is still possible to use the Undo History to return to the Topology brush and further edit the curves.

In a manner similar to the Insert brushes, ZBrush will create a Mask on the support mesh while keeping the new topologized mesh unmasked. This allows you to easily manipulate your new model’s polygons. If you don’t wish to have ZBrush auto-mask the support mesh, simply disable the Auto Mask Mesh Insert option, located in the Brush >> Auto masking sub-palette.

As when doing an Extract operation, the new model will have separate PolyGroups for the inner, outer and edge surfaces. The edges of these groups are automatically creased.

Note: Because of the AutoMasking (see above), you only need to do the Hide pt then Split Hidden functions, making this a very quick operation.