Organize your models, putting their parts where it makes sense to YOU

SubTool Folders are a great and easy way to organize your model parts by grouping SubTools within folders. You can then do things like moving a folder within the SubTool list, automatically moving all SubTools that have been placed within that folder. You can also choose to perform specific operations like generating a Live Boolean operation on the contents of only one folder.

The system is easy to use. After creating a folder, drag and drop SubTools to move them into it – even from another folder. Once a folder contains SubTools you can then perform a global action on all contents within that folder.

Information about SubTools and SubTool folders:
You cannot have more than 1000 SubTools in any project. There is also a maximum of 100 SubTools allowed within a folder.

The creation of SubTools folder can be done in multiple ways, depending on your workflow. You only need to keep in mind that a folder cannot be empty; it always needs to have a minimum of one SubTool.

Folders can’t be nested within other folders. This means that all new folders will be created at the highest level within the SubTools list.

Deleting the last SubTool within a folder will automatically delete the (now empty) folder.

By clicking the Tool >> SubTool >> New Folder function you will create a new Folder containing the currently selected SubTool.

Upon clicking on the function ZBrush will immediately ask you for a Folder name. Enter the name of your choice, then press the Enter key.

When creating a SubTool Folder, we always advise using alphanumerical characters for the name. Despite all UTF-8 characters being supported elsewhere within the ZBrush UI, please only use letters A-Z or numbers 1-9. Avoid spaces, unusual characters or non-English characters for folder names.

2. Creating a Folder Based on a Multi-SubTool Selection

If you use the Gizmo 3D “TransPose All Selected SubTools” function, clicking the Tool >> SubTool >> New Folder button will create a new folder that contains all selected SubTools. ZBrush will tell you that you have a multi-selection and will ask you for confir­mation before asking for a Folder name.

Enter the name of your choice (see the note above), then press the Enter key.

Whether closed or open, a folder can display some information and provide access to specific actions:

The different icons in the SubTool Folder.

As with SubTools it is possible to manipulate folders within the SubTools list to change their location and organization according to your needs.

To move a folder up or down within the list, simply click and drag the Folder icon, dropping it at the location of your choice. A cyan-colored indicator will preview the loca­tion of the folder upon releasing the drag and drop action. 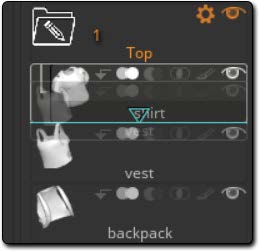 Drag and Drop in action. Notice the cyan separator and its arrow.

You can use the same drag and drop action on SubTools to add then to a folder or remove them.

The angled SubTool arrows below the list can be used for moving individual SubTools into and out of open SubTool Folders. If a Folder is closed, and selected, the arrows will move it up and down the list.

However, if you want to perform an action on a whole Folder, you need to click its gear icon to access the SubTool Folder Actions explained below.

The only exception is the Tool >> SubTool >> Auto Reorder function, which will operate on all SubTools in all folders.

In addition to SubTool management and organization, there are actions which can be applied to an entire folder.
These actions can be just for manipulation, such as with the Transpose actions, which will transfer a list of the folder’s SubTools to the Gizmo 3D’s “TransPose All Se­lected SubTools” feature, preparing it for the desired action. There are also folder man­agement functions to rename, duplicate or delete a folder and its SubTools.

Please refer to the SubTool Folder Functions section below for explanations of all Folder Actions.

The first three functions below have to do with creating folders or the information displayed on a folder. The remaining functions are specific to the SubTool Folder Actions menu. They refer to the specific actions found when clicking on any folder’s Gear icon.

The New Folder function will create a new folder and add the selected SubTool to this newly created folder. ZBrush will automatically prompt for a folder name.
If multiple SubTools are selected through the TransPose All Selected Function found in the Gizmo 3D, they will all be added to the newly created folder.

Creating a new folder is not an undoable action. However, you can immediately remove the folder by using its Delete Folder Action (see below).

SubTool Folder visibility operates in a way that is very similar to that of individual SubTools. However, it allows you to hide or show all SubTools located within the folder.

The Visible Count slider allows you to increase the visible number of SubTools in the SubTools list, from 1 to 24.
Changing this value won’t impact the number of total SubTools allowed in ZBrush (1024 SubTools). It only changes how many SubTools (or folders) can be seen at one time within the sub-palette. This is useful for people with low or high resolution displays who would like to be able to see fewer or more SubTools at one time without having to scroll through the list.

The TransPose Add and Sub functions modify the Gizmo 3D’s existing multi-se­lection. For example, if you already have some SubTools selected and use a folder’s TransPose Add function its contained SubTools will be added to the current selection. Similarly, TransPose Sub would remove the folder’s SubTools from the current multi-selection if any of them are included.

If no SubTools are currently selected, the results of TransPose Add will be the same as for TransPose Set.

The Merge Up function merges the current folder with the next folder above it in the SubTools list, creating a unique folder containing the SubTools previously found in both folders.

The Hide and Show PolyPaint functions are similar to the PolyPaint eye icon located individual SubTools. However, it affects the display of PolyPaint for all SubTools within the folder.

As with SubTool Folder Visibility, this is a globally action for the SubTools within the folder and will not change the individual settings that have been given to each of its SubTools. This means that if you have a folder containing SubTools with PolyPaint turned off for some and on for others, turning it off at the folder level will hide the PolyPaint for all included SubTools but when you turn it back on again the originally turned off SubTools will remain turned off.

The Boolean folder function performs a Boolean operation on all SubTools within the folder. It works in the same way as the regular Boolean operation (using the usual opera­tors and Start Groups), except that any SubTools not within the folder will be ignored.
The first SubTool of the folder is always considered as a positive SubTool and as a Start group regardless of its SubTool operator mode.
The resulting SubTool will be placed below the folder in the SubTools list and the Folder’s contents will be set to Hidden. You can unhide its content by using the eye icon next to the folder icon.

If you perform a Boolean operation of the entire SubTool list, ZBrush will ignore the folders and consider each SubTool state individually. This means that if you want to have the contents of each folder being a different SubTool within the resulting model you must add a Start Group flag for the first/top SubTool shown within each folder.

Please refer to the Live Boolean documentation for more information about the Boolean operation process in ZBrush.

The Boolean DSubDiv action is similar to the Boolean Folder action except that it will turn on Dynamic Subdivision for all SubTools being processed within the folder (and only during processing). It takes effect even if the mode is disabled for other SubTools or globally.

The Merge Folder function generates a new SubTool that is the combination of all SubTools within the folder. The new SubTool will be placed beneath the folder in the SubTools list.

SubTool visibility is ignored with this operation. All SubTools within the folder will be merged regardless of whether they have been set to visible or not.

The Rename Folder functions lets you change the name of the current folder.

Please keep in mind the folder naming conventions discussed earlier in this documentation. Even though ZBrush is a full Unicode application, we always advise the use of alphanumeric names with no special characters. In other words, A to Z and 0 to 9 with no spaces or non-standard English characters.

The Delete Folder functions deletes the folder but not its contents. Any SubTools within the folder will be moved to the SubTool list.

The Delete All function deletes both the folder AND its included SubTools.
This function can’t be undone. Please be careful when using it.