Find below the list of the 2018 deformers found in the Gizmo 3D. Some of them simply apply a deformation to the current model while others may apply topology modifications like adding edge loops or more drastic changes.

The Bevel deformer applies a bevel on the edges closest to the bounding box orien­tation. This deformer will provide the best results on hard surfaces meshes.

The bevel deformer applied on the right. Notice that not all the edges have been beveled, but only the ones that have been defined by the Crease Angle cone value.

The Crease deformer applies a crease tag to all the edges which fall into the defined angle threshold. The crease edges can later be used with subdivision surfaces or apply­ing bevels. 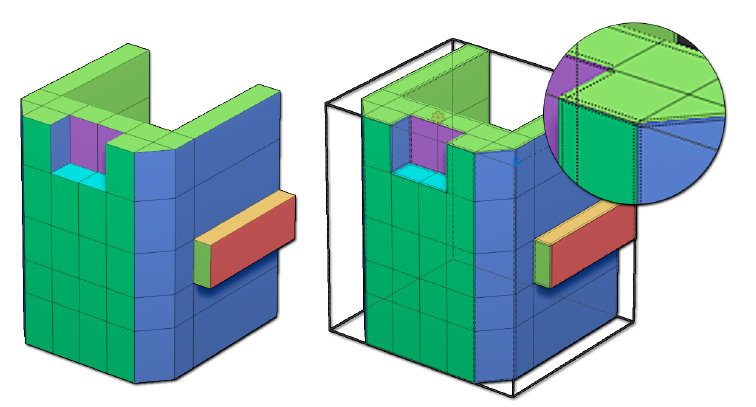 The Crease deformer applied on the right. Notice that not all the edges have been creased, but only the ones which have been defined by the Crease Angle cone value.

To manipulate a single point, simply click and drag on the point to move it across the screen working plane.

You can also select a single or multiple point at the same time by clicking once on a control point. It will turn to a white dot. To add or remove other points, press the Shift key while clicking on new points. Use the Masking commands as well to do multiple selection at once. These points can be manipulated by the Gizmo 3D for both Move, Scale and Rotate operations. 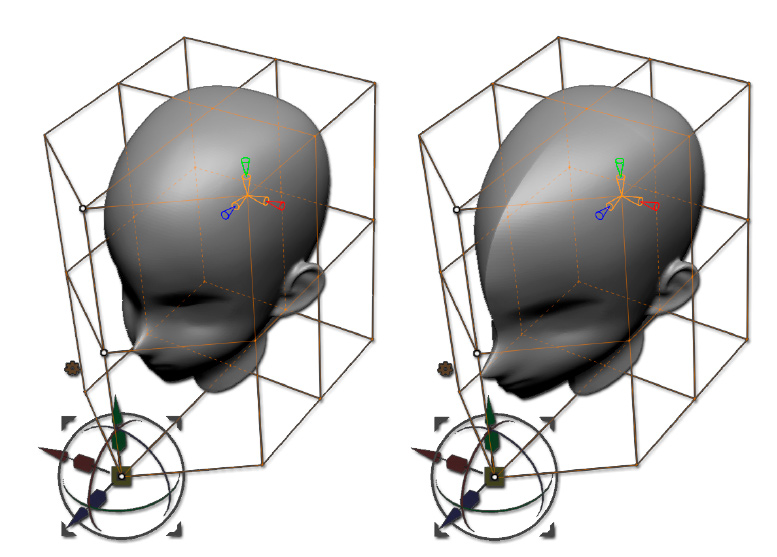 On the left, the Soft Deformer applied to the head and on the right, the Hard Deformer applied. You can see that even if the cage deformation is the same, the result is different.

The offset deformer is very similar to the Move transformation of the Gizmo3D as stretching a cone from the model bounding box will move the model along this cone.

Both opposite cones of the bounding box are doing the same operation.

The benefit of this deformer is to allow you to precisely orient the bounding of your model box based on the Gizmo3D orientation that you can set before selecting this de­former. Then you can use this new orientation within your deformer.

This Project Primitive modifier is a full creation and modification tool. Even if as it is considered a modifier, it will let you build complex models in no time by projecting para­metric primitives like cubes, spheres, cylinders or prism type shapes onto an existing model. The shapes are based on superquadratic formulas.

When using this Deformer ZBrush will allow you to manipulate these basic models by changing their shapes and then transforming them with the Gizmo3D to move, scale and rotate. These shapes will then be projected onto the surface of the original model. As an example imagine taking a ball and putting a piece of cloth over it. The balls shape will be projected through to the piece of cloth.

Since the Deformer is projecting the new shape onto the topology of the existing surface this can result in stretched polygons. ZBrush can add extra polygons on the fly to produce cleaner surfaces where it is needed. This smart and automatic tessellation brings the capability to add new projected primitives on top of previous projected ones, letting you stack projections the one after the other.

The Project Primitive includes multiple controls which will affect not only the shape itself, but also its projection transition. It can be associated with the classic axis symmetry as well as its own Radial Symmetry for intricated shapes.

An example of a model built only by using the Project Primitive deformer. Model courtesy of Joseph Drust.

Projected primitive has four important behaviors that you must keep in mind:

In addition to the cones to change the mathematical aspect of the primitives, the de­former includes clipping controls, aligned with the Gizmo3D axis. By pushing and pulling their controls represented with white dots, you will manipulate a clipping plane perpen­dicular to the manipulation axis.

If you want to clip the model symmetrically, press the Shift key while dragging a Clip dot, the opposite one will be moved in the opposite direction.

With this Clip control, combined with the Cones to change the primitive shapes, you will have a very large array of primitives to build and deform your models.

On the left, the original model with a Sphere projected on the top of the head. On the right, the front clip dot (orange arrow) has been pushed inward to trip the sphere shape.

This is an example project showing the basic usage of the Project Primitive modifier. 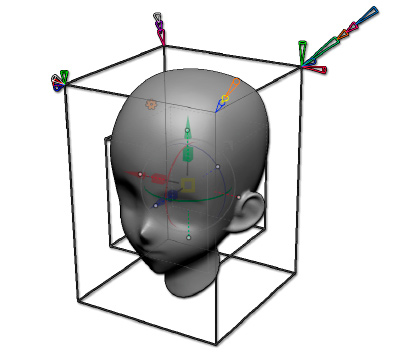 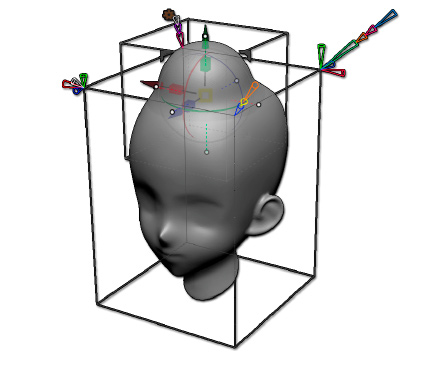 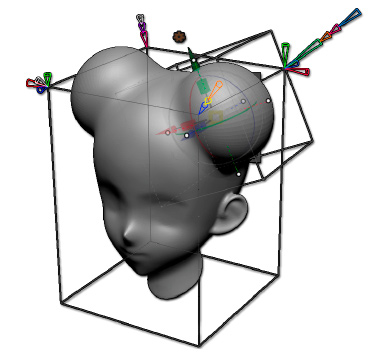 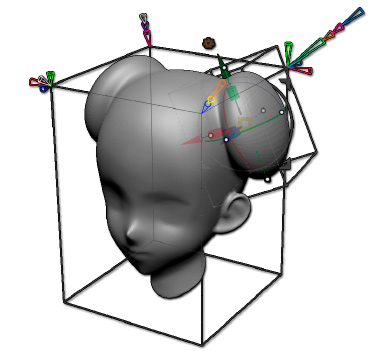 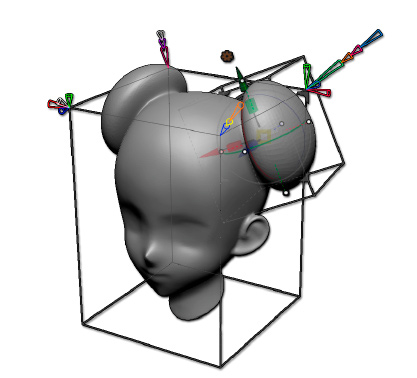 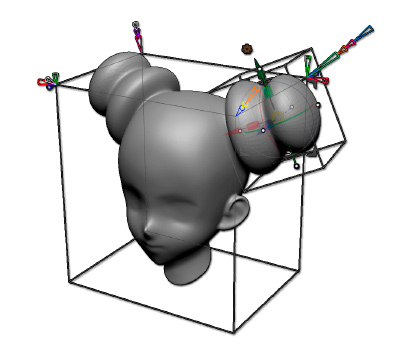 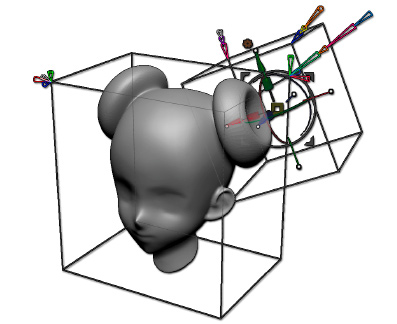 You can continue to manipulate your current projected primitive or apply it to create new ones and then continue to apply some deformations to change the shape of your model or simply creating new models. You only need to keep in mind that you are deforming on existing model with simple shapes and like this, creating some deformations which could be difficult to do otherwise.

The Project Primitive deformer includes a large amount of settings, including dy­namic ones: they are visible or not depending of some other settings.

The Settings are groups by positions located on the bounding box.

The Remesh by DynaMesh lets you convert or update the current model as a Dy­naMesh model, without the need to enable this mode in the Tool >> Geometry palette. You can change all the settings and values while still in this modifier without affecting the original model, but once you accept the modification of this deformer, the current state of the model with its DynaMesh settings will be applied.

If you modify some settings in the Tool >> Geometry >> DynaMesh section, they will be used by the modifier, like the Polish mode.

The Remesh by DynaMesh lets you create a union Boolean operation between all the models of the current SubTool, without the need to go through the SubTool manipula­tion and the associated Boolean selectors.
All the models which have intersection will be combined as a single model which is perfect if you want to merge insert meshes together with the support model.

Note:
The Boolean won’t take in consideration the models that are totally masked, this can happen after using an InsertMesh brush. Don’t forget to unmask your model before selecting the modifier.

This modifier doesn’t have any settings. The Union is done as soon as you enter in the modifier.

The Remesh by ZRemesher allows you to create a retopology of your current model by using ZRemesher. It is very convenient as you can only work on a non-masked part like an Insert Mesh without having the need to split your parts as SubTools.

If you modify some settings in the Tool >> Geometry >> ZRemesher section, they will be used by the modifier, like the grouping options or the Adaptive Size value.

The Remesh by Decimation can reduce the polygon count of the current model by using the Decimation Master plugin. It will more or less reduce the un-necessary vertices of the model by trying to keep a much as possible the original model shape.

The Rotate deformer is very similar to the rotation transformation of the Gizmo3D as stretching a cone from the model bounding box will rotate the model along this cone.

The benefit of this deformer is to allow you to precisely orient the bounding of your model box based on the Gizmo3D orientation that you can set before selecting this de­former. Then you can use this new orientation within your deformer.
Setting:

The Scale deformer is very similar to the scaling transformation of the Gizmo3D as stretching a cone from the model bounding box will scale the model along this cone.

The benefit of this deformer is to allow you to precisely orient the bounding of your model box based on the Gizmo3D orientation that you can set before selecting this de­former. Then you can use this new orientation within your deformer.

Both opposite cones of the bounding box are doing the same operation.

The Skew deformer is creating a deformation of the same name by scaling along one or two axes the manipulated face of the model bounding box.

You are able to manipulate each axis cone of each face of the bounding box individu­ally. For a better control of your deformation.

The Slice deformer is a simplified version of the MultiSlice one. It adds an edge slice all around the model which can be converted as a polygon strip based on the Slice Width cone value.

This modifier is very convenient when working on hard surfaces models to add ring-based extrusion shapes.

The Smooth modifier applies a smoothing to the current object or its unmasked part in a similar way to the Smooth function found in Tool >> Deformation >> Smooth but based on a bounding box side direction. The smooth effect will be go gradually from the side of the stretched cone to the opposite side, from 100% of the value to 0% of the value of the smooth set by the cone.

Because this operation is done on real time, performances can be affected by the number of polygons of the current model.

The Smooth All modifier applies a smooth to the current object or its unmasked part in a similar way to the Smooth function found in Tool >> Deformation >> Smooth.

Because this operation is done on real time, performances can be affected by the number of polygons of the current model.

The Subdivide modifiers allows you to subdivide the current model in a similar way to the Tool >> Geometry >> Divide function.

Note:
Partially masked objects will be completely affected by the subdivision. Only models which will be totally masked won’t be affected.