The Deformer system included in the Gizmo 3D is a series of tools which can apply a global or local deformation to your current SubTool, depending on whether it is masked.
The deformers will let you bend, twist, subdivide, smooth and a lot more. All of the deformers are interactive, making this a great way to visually edit your models.

The Deformers, located at the top of the Gizmo 3D Customize menu.

The Deformers will only work with models that don’t have subdivision levels. If your current SubTool has multiple levels of subdivision, click the Delete Higher/Lower func­tions located in the Tool >> Geometry sub-palette.

The Deformers are located in the Gizmo 3D popup palette, accessed by clicking the Customize icon.

Find below the list of the deformers found in the Gizmo 3D. Some of them simply apply a deformation to the current model while others may apply topology modifications like adding edge loops or more drastic changes.

From left to right: the original model, the Bend Arc applied on one axis, then on two axes.

The Bend Curve deformer bends the current SubTool along a curve which can be modified through control points. The density of the control curve and the associated control points can be interactively modified as well as their positions in space, which will apply the corresponding deformation to the active selection.
Each control point can receive extra deformation for precise control.

On the left, a simple tube with the BendCurve deformer applied and associated with 4 control points. On the right, all the points have been moved to completely change the shape of the tube.

This deformer display a deformation cage on the SubTool. By deforming and ma­nipulating the cage points, you will apply the corresponding deformation to your model. This is also referred to as FFD for Free Form Deformation.
To manipulate a single point, you can simply click and drag on the point to move it across the screen working plane.
You can also select a single or multiple points at the same time by clicking once on a control point. It will turn to a white dot. To add or remove other points, press the Shift key while clicking on new points. These points can be manipulated by the Gizmo 3D for both Move, Scale and Rotate operations. 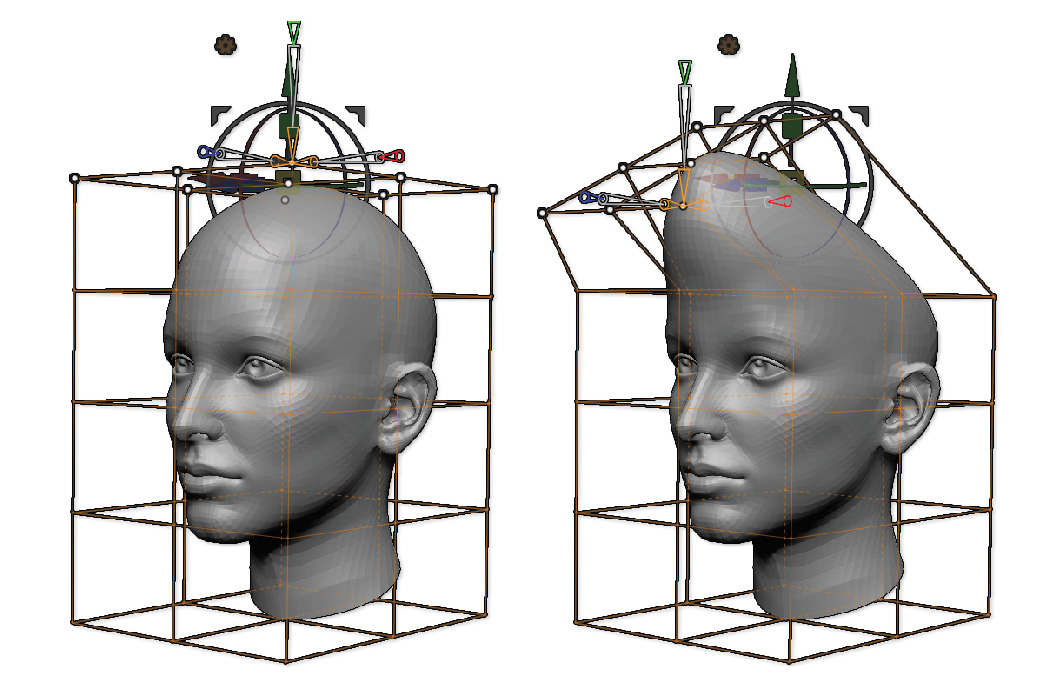 On the left, the Deformer applied to the head with the top point selected. On the right, the Gizmo 3D has been used to scale down and rotate these points, applying a soft and local deformation which would have been difficult to do with the classic sculpting tools in ZBrush.

The Extender deformer by default inserts a loop of polygons along the bounding box axis of your choice. This loop of polygons can be divided and moved along the model by dragging its associated dot. It can also be applied to multiple axes at the same time.
This deformer is a great way to quickly create advanced primitives for creating “kit bashed” style models. 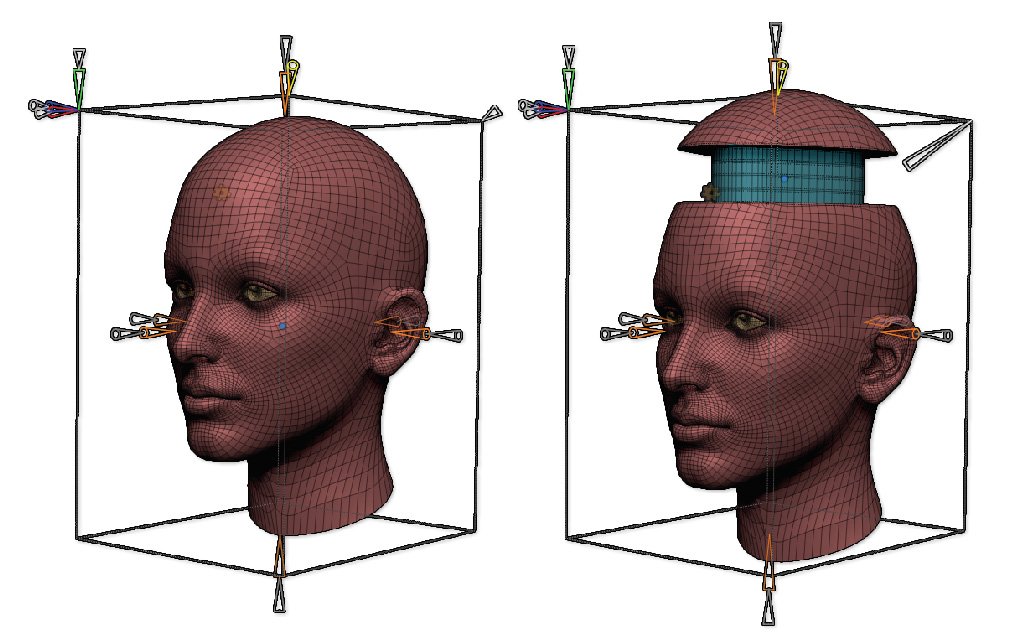 The Extender part has been added to the top of the head. The Inflate cone has then been manipulated to do a negative extrusion.

The Flatten deformer clips the current selection based on the planes of the deformer bounding box. Please note that the polygons of your selection won’t be removed or sliced. They are simply flattened on top of each other, similarly to the Clip Brush. 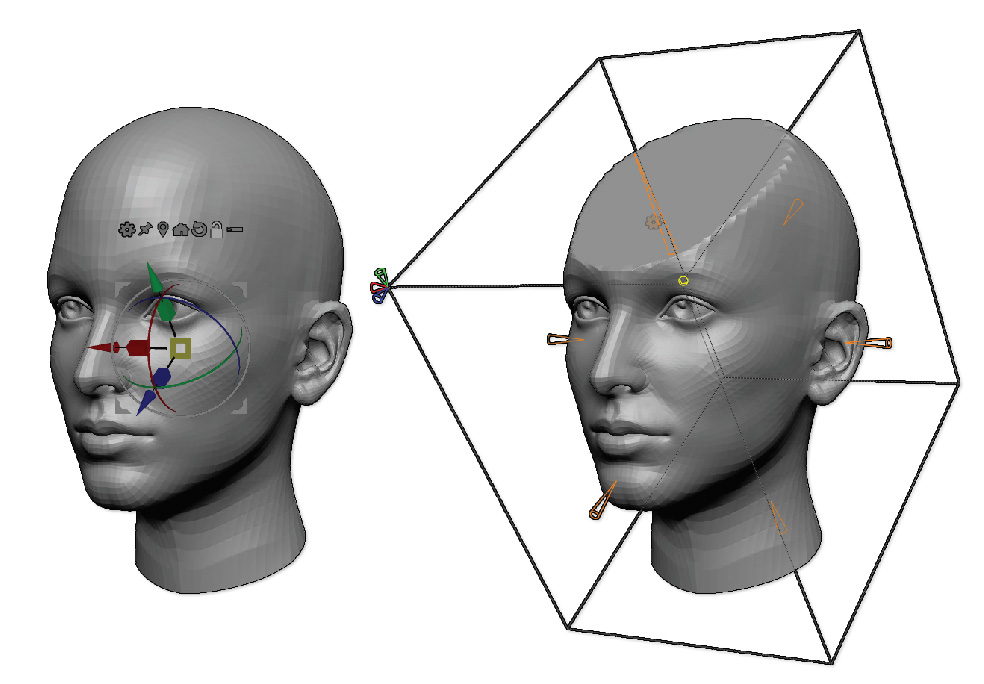 On the left, the original mesh, with the Gizmo 3D rotated. On the right, notice that the deformation box has been oriented with the same angle as the Gizmo 3D, then the Flatten deofrmation has been applied to the top part.

The Multi Slice deformer inserts one or more edge loops along the X, Y and/or Z axis. These edge loops do not follow the existing flow of the topology, instead slicing the way around the model.
The transformation can be freely moved across the model by clicking and dragging the blue dot located at the center of the modified topology. The width of each modified area can be interactively modified as well.

On the left, the original mesh. In the center, Multislice was used to insert multiple edge loops in the center on the model. On the right, the blue dot manipulator has been moved up to set another location for the slices.

The Taper deformer applies the corresponding deformation to the mesh. 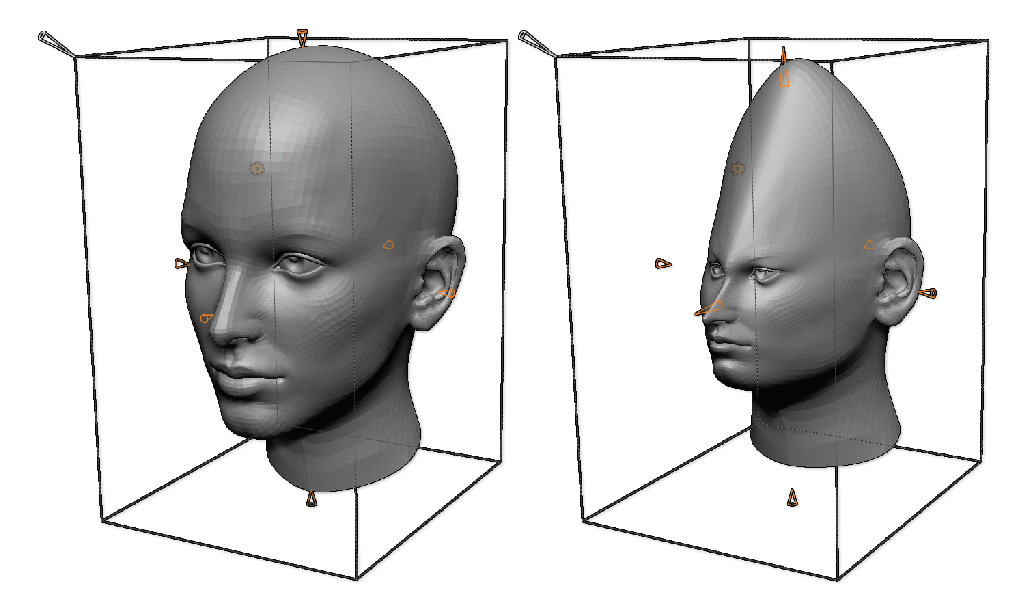 On the left, the original mesh. On the right, the model was transformed with the Taper modifier.

The Twist modifier applies a twisting effect around the selected axis. 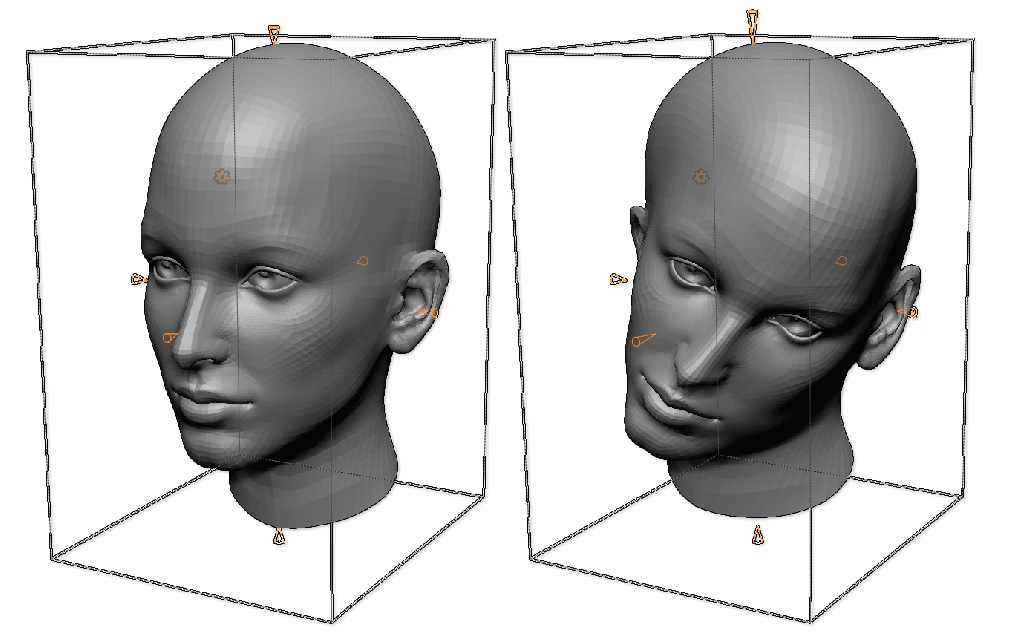 On the left, the original mesh. On the right, a two axis twist has been applied on the model.