The Trim Curve brushes (Trim Curve, Trim Lasso, Trim Rectangle and Trim Cir­cle) are similar to the Clip Curve brush by removing the part of the model which is located on the shadowed side of the curve. There is a fundamental difference, however: these brushes totally remove the polygons rather than simply pushing them toward the curve.

These brushes work only on models without multiple subdivision levels.

For optimum predictable results, keep in mind that the position of the stroke over the model can produce different results.

Do more with these brushes by enabling the BRadius option in the Brush>Clip Brush Modifiers. See the section below about Creating or Removing Thickness with the Trim Curve Brush. 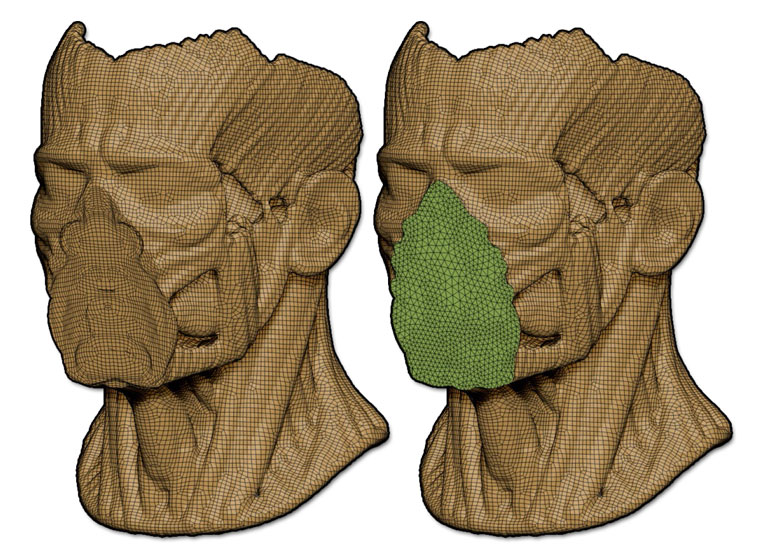 Important Note About the Shape of the Curve

The Trim Curve brush removes polygons which are unnecessary for cleanly capping the remaining mesh.

This hole closing function is able to close complex holes, but it is designed for creat­ing flat caps. This means that the Trim Curve brush will generate optimum results when drawing straight lines or lines with sharp angles rather than rounded curves.

Creating or Removing Thickness With the Trim Curve Brush

It’s possible to cut away a path of geometry by activating the Brush >> Clip Brush Modifiers >> Brush Radius (BRadius) option.

Holding the ALT key during the curve creation will delete the polygons within the brush radius, keeping the rest of the model instead.

On the left, the original Mesh and Trim Curve. In the center, the result of using the BRadius option. On the right, the same BRadius option, but with the ALT key pressed while releasing the brush cursor.