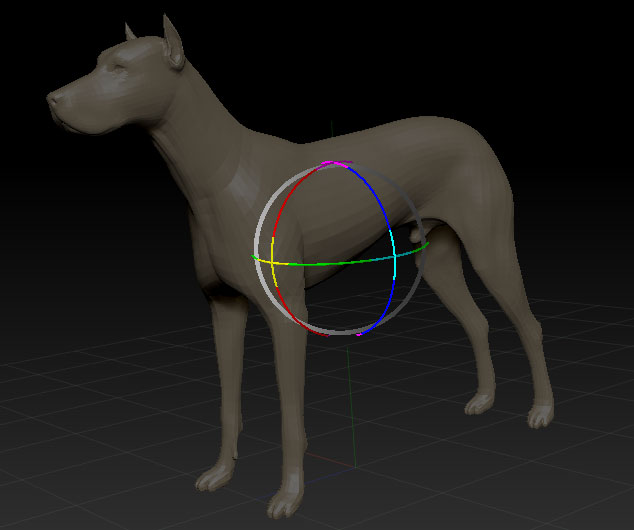 The Gyro is a control that appears when ZBrush is in Paint Mode, and one of the Move, Scale, or Rotate buttons is pressed. When the Gyro is visible, it allows you to place the most recently drawn stroke.

Note: The Gyro can be used to position any type of stroke, not just 3D objects.

With the possible exception of scaling an object along an axis or plane, the gyro is not the best way to manipulate objects while in 3D Edit mode. Other shortcuts available in that mode make it quick and easy to position the model while doing sculpting, texturing, etc.

By default, the Draw pointer is active, which means that dragging in the workspace draws with the current tool.

After drawing a 3D object, you can use the Transform palette functions to move it around the workspace, rotate it around its pivot point, and scale it with respect to the pivot point. To start, click the respective icon.

When you activate a transform mode, the most obvious thing that happens is that the Gyro tool appears superimposed on the object in the document window:

The Gyro is a three-dimensional transform assistant that consists of three multicolor rings that move and rotate along with the object, plus a fourth, gray ring that moves with the object, but always stays parallel to the view plane. The colored rings let you perform transformations with respect to any local axis or plane of the object. The gray ring lets you perform move and rotate transforms with respect to the view plane, no matter what the orientation of the Gyro is.

When you draw an object on a blank background, its Z axis is perpendicular to the view plane. If you then activate a transform mode, you can see the Gyro’s blue ring, which allows rotation about the Z axis, but because you’re viewing the green and red rings edge-on, they appear to be lines. Note that other colors mark the ring intersections; for example, the intersection of the red and green rings is yellow. We’ll cover the reason for these different colors shortly.

Note: The Gyro’s size remains constant throughout any transforms. Sometimes it’s smaller than the object it’s attached to, but sometimes it’s larger.

Note: You cannot undo transformations on an object. However, transforming doesn’t modify an object’s basic geometry, so you can always select the Draw Pointer and press Undo to clear the object and draw it again.

This section begins by describing the use of the Gyro to rotate objects, because its functioning can most easily be seen in this mode.

Immediately after adding a 3D object on a blank background or a surface that’s parallel to the viewing plane, selecting the Rotate icon or pressing the r key presents you with with the Gyro, which will appear something like this:

You can now do any of a number of things:

As you saw in the previous section, Rotate uses the colored rings for rotation around an object’s local axis, but not the ring intersections. Move, on the other hand, uses the axis intersections for single-axis local translation, and the rings for planar translation. But there are several other modes as well: You can move the object parallel or perpendicular to the screen, or with respect to the drawing, so that it constantly reorients itself depending on the surface normal of the existing pixols.

After adding a 3D object, to enter Move mode, click the Move icon or press the w key. If you’ve added the object on a blank background or on a surface that’s parallel to the screen, it uses the default orientation, as shown in the illustration below:

At this point, you have several alternatives for moving the object, depending on where you click when you start to drag:

Note: This reorientation always overrides any existing rotation you’ve made to the object. If you want to keep an existing orientation as you move an object, drag using the rings.

Also, if you move an object over the background using this method, it automatically snaps to the back clipping plane. If you then rotate it, parts of the object may move behind the clipping plane and become hidden by it. In such cases, move the object forward by positioning the cursor outside the Gyro and dragging downward.

Scaling objects in ZBrush is fairly straightforward. As with Move, Scale uses the rings to resize objects in two dimensions, and the ring intersections to resize in one dimension. Note, for objects drawn on a blank canvas, the object must be rotated slightly before scaling on the yellow (in/out) axis. You can’t scale using the gray ring; that would skew the object’s shape (however, this kind of distortion can be performed by editing the object). To scale in three dimensions, drag anywhere away from the rings. 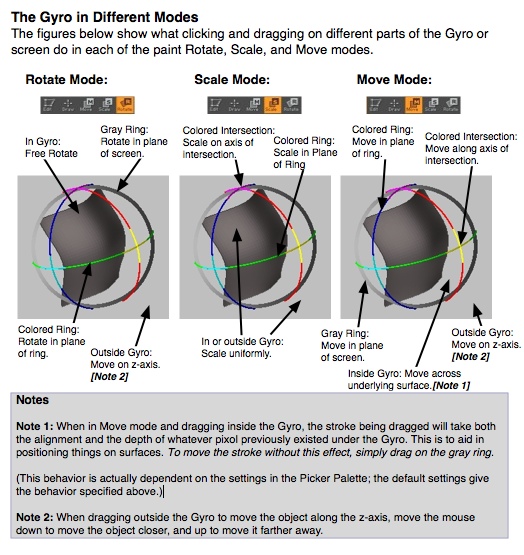 Pictorial reference for the Gyro.