The Ctrl key by itself activates ZBrush’s masking mode.

Remember that you can click on the Z next to Inflat to deactivate that axis.

Your model should now look like the image above. Depending upon the orientation of the model when you were masking it, you might have to use the X axis for Flatten or a positive value instead of the negative 80. If that’s the case, simply undo and use the different settings.

Now that the stylized beetle has been created, it needs a texture. We’ll use Projection Master to do the job. Since the model is a parametric object, it already has the most appropriate UV mapping assigned. In this case, that’s spherical mapping.

The Projection Master panel will appear in front of the canvas. 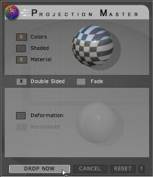 Double Sided tells PM to texture the side facing the camera and the opposite side of the model at the same time. Fade means that the colors being applied will not be faded as the polygons angle away from the camera. (For most texturing, you would leave this on, since it allows even blending as you rotate the model over the course of several drops.) Material tells ZBrush to also embed any selected materials as a part of the texture.

Now that the model has been dropped, you can use all of ZBrush’s tools to texture it.

3D objects can be used to draw all kinds of shapes when Zadd is turned off. No depth is applied, so all that you get is the object’s filled shape.

When move is active, it’s best to click inside the gyro (without clicking on one of the rings). This keeps the circle object aligned to the surface beneath it.

The model is now fully editable again, and can be rotated to a new angle. You’ll also see that the Texture thumbnail has updated to reflect the painting that you just did.

We don’t want the shell pattern on the beetle’s belly, so we’ll remove it.

This selects the Basic Material again by sampling it from the canvas.

Any of the color patches in the ZBrush interface can be used as pickers by dragging from them onto the canvas. Whatever color the picker is over when the mouse is released will be the selected color.

There’s no need to be really accurate with this, since the underside will probably never be seen.

This will make it easier to draw the model in the scene.

Paint Ladybugs onto the Scent

Now that our little ladybug is finished, it’s time to put it in the scene.

Now it’s time to make the scene more dramatic. We’ll do this with lighting and render effects, which will bring out the detail.

This removes ambient light from the scene, so that all the lighting comes from the lights themselves.

Lights can be moved around the canvas using this thumbnail. Some light types can also be precisely positioned by dragging Light:Placement:P onto the position in the scene where you want the light. Clicking on the square in the light thumbnail changes it from a front light to a back light. Clicking again turns it into a front light once again.

ZMode is a special way of rendering shadows that takes the depth of the pixols at the edges of objects into account. It results in more accurate shadows.

This cluster of switches is used to activate ZBrush’s render effects. They are only used during a Best render. While basic shadows are generated by the Preview renderer, you need to activate the render setting and do a Best render to see the high quality shadows controlled by the Light:Shadow menu. 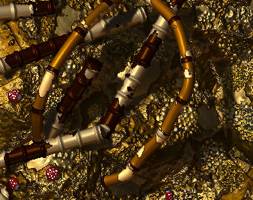 Pay close attention to the shadow outlines. If the shadows look right, your shadow length setting is good. If parts of the shadows seem to be missing where the model is farthest from the surface that the shadow is being cast on, you’ll need to increase the setting. You may find holes in the shadows in places that obviously have nothing to do with the shadow length. This is because 1 ray is not enough for high quality ZMode shadows. We don’t want to increase the number of rays until necessary, however, as that also increases render time.

The render will take longer this time because more rays are being cast. The shadows are probably too indistinct now. This is because the shadow-casting objects in the scene are very narrow in diameter and we’re using quite a lot of rays in order to get really good shadow accuracy. Lowering the Aperture setting further “tightens” each ray, making the shadow edges more distinct while still retaining the softness of Global Shadows. The more rays that you use and the more distinct you wish your shadows to be, the lower you will need to set the Aperture.

The play of light and shadow should now be pretty dramatic.

The Adjustments menu gives several controls for manipulating the overall appearance of a scene without the need to render it again.

Fog is another render effect that can be used for a variety of purposes. It has several controls, found in the Render:Fog menu.

The two color patches are used to set the near and distant fog colors. We’ll leave them alone. The Depth1 slider sets the closest fog depth, while Depth2 specifies the farthest depth.

This sets the near depth to the point at which the cursor was released. Now the fog is localized so that it won’t obscure the Z at all.

This makes the fog reach its maximum intensity sooner. There are two special patches between the color patches. These are used to give the fog a texture and an alpha.

Nothing will change in the document, since we’re using the Preview renderer.

This keeps the engine from doing a new Best render for each setting change.

If the results are to your liking, there is one last step to take:

This turns on ZBrush’s special antialiased display mode. The document is not resized, but any exported image will be.

Congratulations! You’ve just completed a 2.5D project. In this section, we’ve covered a lot of ground. We used a parametric object to sculpt a simple beetle, which was textured using Projection Master. We then worked with ZBrush’s lighting and rendering effects to make the image more dramatic. These same techniques can be used to sculpt/paint far more impressive scenes that what was created in this tutorial. While the bamboo may not be incredibly dramatic, it was chosen as a project specifically for the wide variety of techniques that are employed. You should now be able to sculpt a variety of shapes from primitives, understand the difference between an editable object and a snapshot, and be able to create custom materials. You should also be able to texture using Projection Master, and be comfortable with painting using various combinations of material, color, and depth.

Remember that there are MANY ways to accomplish various tasks in ZBrush. As you become more familiar with the software, you will come to learn the techniques that work best for your personal style and needs. This tutorial has been meant to give you a broad understanding of 2.5D painting, which you will then be able to expand upon during your own sessions. Now that you have the basics down, the remaining chapters of this manual will cover more specialized portions of the ZBrush software.