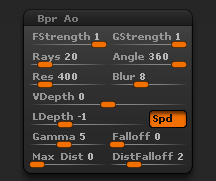 Ambient Occlusion Strength. The Strength slider sets the strength of the ambient occlusion effect; higher values give a stronger effect.

Ambient Occlusion Color. The Color button sets the color of the ambient occlusion: Color is not included in the AO map created when the Create Maps option is on.

Ambient Occlusion Rays Count. The Rays slider will set the number of rays used in the ambient occlusion calculation: A higher number will give softer AO, depending on the Angle setting. Increasing ray number will increase render time.

Ambient Occlusion Maximum Angle. The Angle slider should normally be left at 360 but reducing the value will narrow the AO effect in relation to light direction.

The Res slider will set the AO resolution in pixels: This figure is effectively the image size (independent of document size) that ZBrush uses internally to calculate the ambient occlusion. Lower settings will render more quickly, higher settings will give greater accuracy. Sometimes a lower value can give the desired result with less processing overhead – for example, when a weak AO effect is required.

The Blur slider will set AO blur radius in pixels: Higher values give softer, more blurred ambient occlusion. This is related to the Res slider and should be adjusted in tandem for the same effect. For example, if the Res slider value is changed from 500 to 1000, a Blur value of 4 should also be doubled to 8.

The VDepth slider will set view depth offset in pixels: The AO calculation is offset towards (with negative values) or away from (with positive values) the viewer.

The LDepth slider will light depth offset in pixels: The AO calculation is offset towards (with negative values) or away from (with positive values) the light sources.

The Spd button will set sub-pixel depth calculations: Gives greater AO accuracy. Normally left on but turning off will speed up render times when experimenting.

The Maximum Distance slider controls how far the AO effect stretches. A higher value gives a longer effect. The default setting of 0 disables this option, giving the same effect as this slider set to maximum.