The Alpha>Modify sub-palette allows you to alter the selected alpha in various ways. 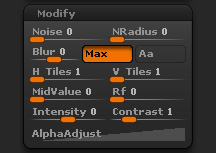 The Noise slider adds random turbulence to this curve. A value of 0 adds no turbulence; the curve is smooth.

The NRadius slider will adjust the scale of the noise being applied to the alpha. With a larger setting the noise radius will be increased that will give a larger scale to the noise.

The Blur slider adds a blur effect to the selected Alpha before applying or converting it. Changes to the Blur slider are not reflected in the Alpha’s thumbnail image.

The Aa will apply an anti-aliasing to the alpha. This will smooth the transition on the alpha.

The H Tiles will tile the selected alpha along the horizontal access. The H Tiles can have a different value then the V Tiles to create unique tileable alphas.

The V Tiles will tile the selected alpha along the vertical access. The V Tiles can have a different value then the H Tiles to create unique tileable alphas.

The Radial Fade slider causes this Alpha to blend from full-intensity at its center, to transparent at its edges, in a circular radius. This effect is accomplished only when applying or converting the Alpha, and is not reflected in the Alpha’s thumbnail image.

Press the Intensity button to increase the overall value of the selected Alpha. Use Alpha:Make Modified Alpha to bake this change into a new Alpha.

Press the Contrast button to increase the overall contrast of the selected alpha. Contrast is a useful way to harden the edges of alphas.