When used with painting tools, Alphas determine the shape of the brush being used.

When used with 3D objects, Alphas can be used to sculpt the objects in unique ways, or as displacement maps.

You can add Alphas to this palette by importing images from disk files, or by grabbing depth information from the canvas (using the MRGBZGrabber Tool). You can export any Alpha as an image file, in a variety of formats.

Alphas can also be converted to Stencils, Textures, or even 3D meshes. They can also be modified using the Alpha Adjust curve. 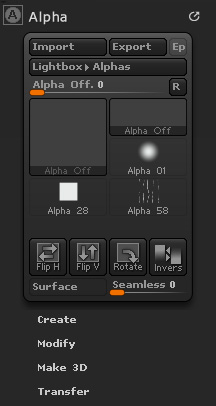 The Import button loads an image from a saved file. ZBrush recognizes a number of standard image formats for import and export including .bmp (Windows Bitmap), .psd (Photoshop), .jpg (JPEG), .tif (TIFF). You can select multiple alpha images and load them all at once. If you import color images, they will automatically be converted to grayscale.

For best results, image files should be flattened 16 bit grayscale, saved without compression. In Photoshop, if saving PSD format, makes sure that Disable Compression of PSD and PSB Files is checked under Edit>Preferences>File Handling. If saving as TIFF, make sure NONE is selected for Image Compression in the TIFF Options dialog that appears prior to saving the file.

The Export button saves the current Alpha to an image file in a variety of file formats. Alphas created within ZBrush will be 16 bit or 8 bit depending on how they were created.

Use the Alpha selection slider to select any item in this palette by number.

Alphas can be selected from either the Alpha palette, or the large Alpha thumbnail on the left of the ZBrush canvas. In either case, click on the large thumbnail to bring up the full selection of alphas. Within the palette, you can also click one of the small thumbnails that show recently used alphas, to select it.

The inventory of alphas works the same as others in ZBrush, such as those in the Tool and Material palettes. The active alpha is grayed out to indicate that it is already selected. 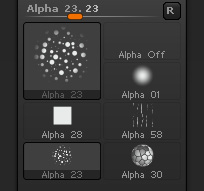 Note: In the Alpha Palette, click one of the small thumbnails and then select an alpha from the resulting popup of the alpha inventory, to have the selected alpha replace the clicked thumbnail, rather than be added to the list of recently used alphas.

To see the name, size, and bit depth of an alpha, hover the mouse over its thumbnail.

Flips the alpha left-to-right, making it a mirror-image of itself.

Flips the alpha top-to-bottom, making it a mirror-image of itself.

Rotates the alpha by 90 degrees clockwise. Height and width remain the same, so if the Alpha is not square, it is stretched to fit the current width and height values.

Produces an inverse of the alpha so that white becomes black, darker grays become lighter, and vice-versa.

The Surface button mode automatically defines the best middle gray value for your alpha. It allows you to add details from the alpha to your sculpt without destroying details already on the surface.

You may need to increase or decrease this value depending on the complexity of your alpha. Most alphas require a unique setting for best results.